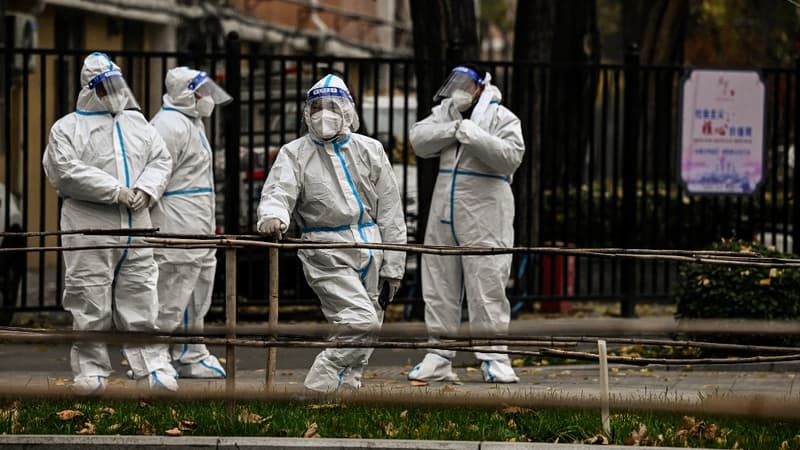 China continues to loosen up. After Canton, several other cities in the country relaxed the draconian anti-Covid rules on Friday. This relaxation comes hand in hand with the historic protests in recent days to demand an end to the restrictions and more freedoms.

Chinese anger and frustration over the health hardline in the fight against the pandemic had boiled over into the streets this past weekend, a mobilization on a scale unprecedented in decades.

Not since the Tiananmen protests in 1989 had the country experienced such an uproar. But China moved quickly to quell the movement, with a heavy police presence on the streets and increased surveillance of social media.

The track of a quarantine at home

At the same time, several cities have begun to ease restrictions, such as abandoning mass daily testing, a tedious mainstay of life under “covid zero.” This did not prevent sporadic skirmishes.

Images posted online Thursday night and geolocated by AFP show dozens of people in front of officers in full protective suits in front of a secondary school in Yicheng, Hubei province. According to the person who posted the video, these are parents whose children tested positive and were taken to quarantine facilities. In the footage, we see people reaching for hands and parents on their knees, begging to take their children home.

In theory, anyone who tests positive in China should be placed in a quarantine center, with varying comfort. But it seems that a sea change in doctrine is currently taking place.

In an analysis published Friday by village newspaperorgan of the ruling Communist Party, several medical experts support the measures taken by some local authorities to allow this quarantine to be carried out at home.

Take the subway without a negative PCR test

Officials from some neighborhoods in Beijing’s Chaoyang district said the measure is now being applied in their area.

The industrial city of Dongguan announced on Thursday that people who meet “specific conditions” will be allowed to quarantine at home, without specifying what those conditions are. The tech megalopolis of Shenzhen has applied a similar policy since Wednesday.

At the national level, members of the government have also signaled that a broader relaxation of the policy could be contemplated.

Speaking to the Health Ministry on Wednesday, Vice Premier Sun Chunlan acknowledged the low risk of the Omicron variant and the improvement in vaccination rates, according to the state news agency Xinhua. That is why China’s approach to the virus is “faced with new circumstances,” she said.

A central figure in the Chinese strategy against the pandemic, Sun Chunlan did not mention the term “covid zero”, raising hopes that this strategy, which has been disrupting the lives of the Chinese and the national economy for three years, will soon be relaxed. .

Starting Monday, Beijingers will also be able to take the bus and subway without having to submit a negative PCR test result of less than 48 hours, the city council announced on Friday.

However, users will still need to present a green health pass, confirming that they have not crossed a “high risk” area. The same measure has been in force since Friday in Chengdu.

Still in Beijing, health authorities on Thursday asked hospitals to stop refusing care if a PCR test is not performed within 48 hours. In fact, China has experienced a number of deaths, when care or relief has been delayed by strict anti-Covid measures.

In January, a pregnant woman in Xi’an lost her baby after the hospital refused to admit her for lack of a valid PCR test. These deaths have been a rallying cry during the protests, with a viral post listing the cases of all those who have died due to negligence related to health restrictions.

Many other cities, however affected by an uptick in coronavirus cases, are now allowing restaurants, shopping centers and even schools to reopen, thus clearly deviating from the confinement rules that have prevailed until now.

In the city of Urumqi, the capital of the Xinjiang region, where a deadly fire sparked the first protests, authorities announced Friday that supermarkets, hotels, restaurants and ski resorts would gradually reopen.

But this lifting of restrictions could have tragic consequences if not done carefully. In fact, the Chinese population is poorly vaccinated, especially among the oldest and most vulnerable to the virus.